There are a couple of things that irritate me when I’m in the store:

There are about 294 more bullet points that could go on to this list, but I’m going to stop it there because that last bullet is the most important. I’ll tell you why that is after the stats for today’s wine. 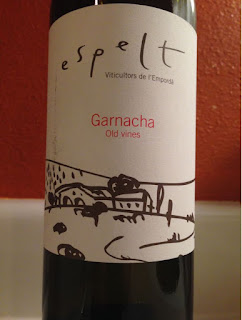 Name: 2012 Espelt Garnacha
Vintage:  2012
Region:  Northeastern Spain
Alcohol by Vol.:  14%
Price:  $13
(Price can vary on state, taxes, the store’s mark-up, and if you are able to draw any scenic picture that is better than the label of this bottle. I can’t, so that is why I paid so much for it…)

So, going back to this dude handing out wine samples. He asked if we would be interested in trying a little bit of what he was selling. My wife got the chardonnay and I tried this one on for size. I asked a couple of questions regarding the varietal and the region to see if he actually knew his stuff or if he was just blowing talking points from a piece of paper up my ass. He actually did reasonably well, so I picked up a bottle and put it in my basket. Y’all might think it’s mean, but I like to think of it as helping with the personal development plan of people who work in my local grocery stores.

I took it home and poured for a tasting. The color had me in a place where I had a hard time determine where I placed the color. It was a somewhere between ruby and purple, so I’m making two new colors: Rurple or Purby. Crayola, you can email me and I’ll tell you where you can send the royal checks for using these in future box sets.

The nose made the wine smell “hot”, which I sort of expect once the wine hits 14% ABV. I also got some hints of black pepper and blackberries. I thought that I smelled some currant in the sample, but it could have been my imagination. The smell wasn’t large enough for me to feel like I can confidently say they were present.

The wine was more sour than I expected. Most Garnachas have a big fruity, “I’m going to punch you in the face with flavor and you’ll like it” character. Espelt had a heavy body, a lot of that blackberry flavor, and a long finish but the sour flavor was kind of sharp for a sample. I didn’t notice it as much after a couple of glasses, but I don’t notice a lot of things after a couple of glasses, so…

I think the Espelt Garnacha has potential. I’m hoping that my bottle was a little off with the sourness of the wine. Even if you think it’s too sour for you, I recommend pairing it with some food to see if that will make it more up your alley. That is the only thing I regret not doing in the review. Don’t be a screw up like me, do this one right and let me know what you think.

Hello everyone…I’m back! I took a year off from writing[...]