A while ago, my mother-in-law picked up a bunch of Cabernets at the store and brought them over to our house. I got to pick some of them out to try and, I admit, I went based off the labels because my wife and I are trying to decorate the door to our pantry in wine labels. We decided that the kitchen was going to end up in a wine theme and that door will become a perfect piece to display. Enough small talk. Time to review the Bubo Cab! 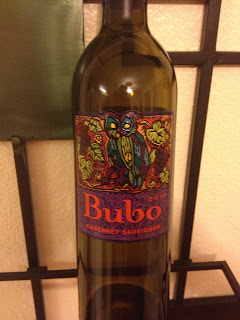 Name: Bubo Cabernet Sauvignon
Vintage: 2011
Region: California
Alcohol by Vol.: 13%
Price: $8
(Price can vary on state, taxes, the store’s mark-up, if you knew that bubo means owl, and if you even cared what bubo meant before I told you.)

However, I am just going off of assumptions based on the lighting in my kitchen. I didn’t use anything fancy like a chromometer, opaciometer, clariometer, or smellometer. Frankly, I don’t even know if anything of those really exist, but if they don’t I am claiming copyright on the names. To put the percentages in the common tongue, the wine was mostly red, barely let light through, and was mostly clear of artifacts. The nose presented with mostly plum aromas that had lesser cherry, spice, and oak accents. I could have just said that, but then I wouldn’t have had an excuse to invent new words.

I put the wine in my tasteometer (aka mouth) and moved it around a bit. It had a medium body and I could tell there was plum, cherry, oak, and spice but everything was very subtle and nothing particularly stood out.The cherry was more active in the middle of the taste and the plum showed up more in the short finish.

I think that this would would be good with a nice pasta dish. I’m thinking something alone the lines of moderately spiced marinara sauce with penne and sausage. Throw in some gooey cheese to melt on top and you have a meal that could impress the hearty Italian in us all.

This wine didn’t knock my socks off but it wasn’t bad either. I like the fact that it was only 8 bucks and I think that it is priced very correctly for the quality. Also, I noticed that as we were drinking the wine over the evening, the flavors tended to to get significantly stronger as we got near the end of the bottle. I don’t know if this because it has a requirement to breathe heavily, but you may want to aerate it a couple of times before serving.