Today, I am reviewing a wine from a country that has been a think tank for philosophers, emperors, and scholars. A place where marble adorns ancient ruins and where some of the biggest Renaissance masterpieces were created. Plus, the country is shaped like a boot!  Who couldn’t have a great time in a place that is shaped like a boot! Let’s see if this Zonin Pinot Grigio will honor its homeland. 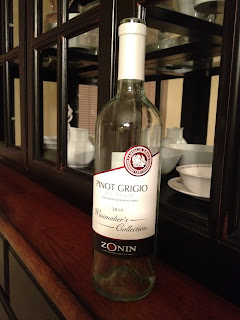 Name: Zonin Pinot Grigio
Winery: Casa Vinicola Zonin
Vintage: 2010
Region: Northeastern Italy
Alcohol by Vol.: 12%
Price: $2 for $10.99 or 1 for $8.99 at Gabriel’s Liquor.
(Price can vary on state, taxes, the store’s mark-up, and your opinion on how developing countries can use macroeconomic advantages to shift the demand curve of their saltine cracker industry to the right.)

I decided that this tasting would be best done to a soundtrack. I opened up Spotify and started playing “Rock the Night Away” by Europe. (I know, I know…but I can’t find a band called Italy, so it’s the next closest thing on my playlist.) I poured the wine and it showed a good clarity and pale yellow color. I started smelling it and found that this wine could be summed up with a single word: peach. It was very obvious that they want that aroma to be the focal point.

As “Carrie” began to play, I started to taste the wine. It was very crisp and had a good amount of citrus that presented after moving it around in my mouth for a few seconds. It was a medium bodied wine that was very smooth on the palate and finished cleanly. I was hoping for more of than peach, but I couldn’t detect it if it was there. I kept tasting and searching for a few more minutes until the “The Final Countdown” started. On that note…

This wine was not bad at all, but I don’t feel that I was able to pick out the other flavors that might have been in there. I would like to try this again with my wife’s chicken piccata or a good fruit based desert, such as a sherbet or tort.

Today is the last day of the crazy date night[...]